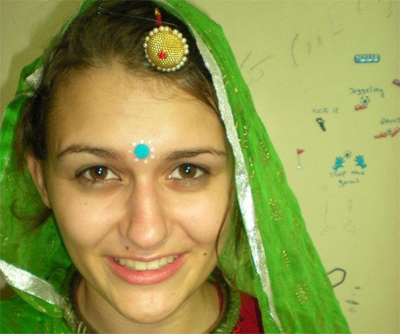 Kennedy-Lugar Youth Exchange and Study (YES) Abroad student in India (2011-12), Hannah Heyworth recently won a national Indian creative writing competition, Dickens 2012, conducted by the British Council on Education to celebrate the 200th birthday of Charles Dickens. The competition, organized in collaboration with publishers Penguin India, encouraged writers between the ages of 16-21 to submit a creative piece on Dickens. The Council received 173 entries ranging from poetry and short stories to reportage. Heyworth and several of her Indian classmates in Chennai entered the competition. Heworth’s poem on Chennai was one of six finalists. As such, she was awarded a trip to Kolkata to compete alongside the other five finalists for the top prize, Hayworth, the only foreigner in the competition, finished first.

Her winning poem is below:

“Modern Chennai in the Eyes of Charles Dickens”

It was the best of places, it was the worst of places,
It was a city, a metropolis difficult to constrain to rhymes,
It was a shining example, it was subpar at best,
Poverty, shouting, pollution, crowds, but lest
I forget! Also the peace and tolerance of a diverse people,
Where in one direction is a mosque, temple, and steeple.

An unforgiving climate, and an abundance of dust,
But where to sample the local cuisine is a must,
A historic language curving over tacky neon signs,
Yet carved as well into ancient ruins in poetic lines,
A history of colonialism, exploitation, and trade,
But where the colorful traditions shall never fade.

A conservative place, where time runs slower,
But do not assume a place where any development is lower,
A quiet, bustling place, an old-fashioned and modern place,
A place where ancestral homes and condos fill adjoining space,
This bundle of contradictions, my friend, this tumble of culture,
Is no decaying town circled by desertion and abandonment- those vultures!
This is a city, reborn a thousand times with only improvements.
This, my friend, is Chennai.


Alumni wrapped up 2022 with lots of celebrations!


Matias from Philippines is actively involved in school life