These Alumni are Sounding Good and Doing Good

YES Alumni Malaysia are organizing a concert to promote volunteerism and support several local NGO's making a difference in the community. With the help of AFS Antarabudaya Malaysia, Young Southeast Asian Leaders Initiative, and the US Embassy, the project, SoundsGood!, has been making a splash in local media, including write-ups in Time Out KL and The Star. Check out the great article below! 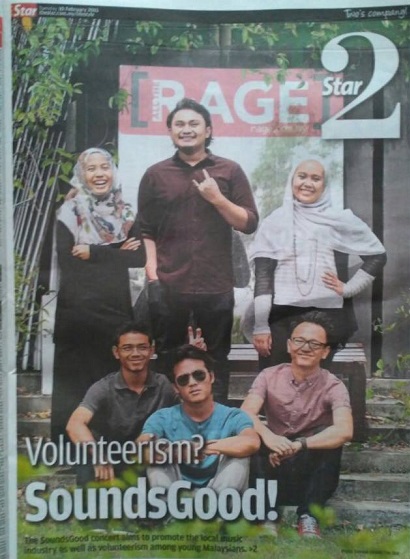 By Ailyn Low and Ivena Hon

Volunteerism doesn’t rank too highly on the list of most young Malaysian’s priorities. When they do volunteer, most of the time, it’s for the sake of a college or university credit.
That’s something the Youth Exchange and Study (YES) Alumni hope to change.

The YES program, funded by the US Department of State, is an exchange program for students ages 15 to 17 to transfer to the United States for one academic year.

During their semester abroad, students are required to complete 50 to 100 hours of community service, something which has inspired many members of the alumni to become more involved in voluntary work when they return to Malaysia.

Nazrin Ariffin, 22, is one student who was particularly inspired. He is now organizing his first project in Malaysia – the SoundsGood concert, a free-to-enter concert on February 14 at KLPac aimed at promoting volunteerism among young Malaysians.

“Being part of a band and loving music, the idea of incorporating music and community service projects has always been on my mind,” said Nazrin, an actuarial science student.
“The universality of music would definitely help spread the message of volunteerism better.”

With the help of 11 other students, nine of whom are also YES Alumni members, Nazrin was finally able to make the project happen. One of those students, Kan Wai Min, 21, said: “I feel music works particularly well with young people. Hopefully this will attract them to come and learn more about volunteerism.”

On top of that, Nazrin hopes each band will be able to draw their respective crowds to the event, where various NGOs will be setting up booths to sign up new volunteers.

And though their primary goal is to provide a platform for young people to gain information on how they can volunteer, they also plan to showcase local talents during the concert. Among the artists who will be performing are Temjin, Box For Letters, Relent, Pitahati, Narmi and Meet Uncle Hussain.

It’s a simple concept, promoting bands who could in turn help promote and encourage volunteerism, but it’s one that Nazrin and the team hope will have a meaningful impact. 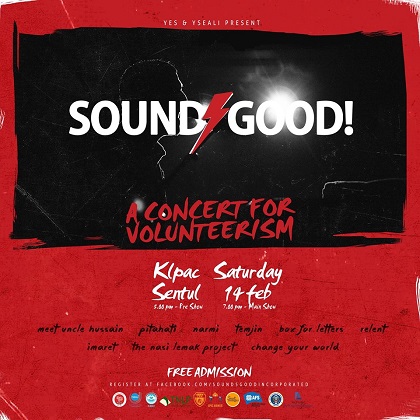 Hopeful outcomes
One of the main goals of the team is for SoundsGood to become a recurring project.

“We want to do something more sustainable, which is why we’re hoping this concert won’t be just a one-off thing,” said Kan.

Four NGOs will be at the concert, including the Islamic Medical Association of Malaysia Response & Relief Team (Imaret), The Nasi Lemak Project (TNLP), Change Your World (CYW), and Small Changes.

Nazrin hopes SoundsGood will be able to help the NGOs recruit many young volunteers for the years to come. He added that the success of this concert will determine whether they will organize another one in the future. However, as with all projects, Nazrin encountered some setbacks while organizing SoundsGood, especially when it came to time and money.

“There were a lot of processes we had to go through before moving on to the next stage which took up a lot of time. Plus, we couldn’t really move forward with the lack of funds,” he said. Of course, it was nothing a bit of hard work and determination couldn’t fix, and now the project seems set to make the difference the organizers had hoped for.

After each performer does their set, one of the NGOs will take the stage to talk about their work.

One of the major projects that will be highlighted is the building of permanent flood-resistant houses by Imaret happening this March in Kelantan. “When Imaret heard we were planning this concert, they jumped in and offered to work with us. It will definitely be a plus if they attracted volunteers during the concert to participate in the reconstruction phase,” said Nazrin.

Hanan Anwar, 22, is also optimistic about the project. She said: “Not many young people know the different volunteer programmes available so this concert would be a fun yet educational platform for them.”

Being grateful
Volunteering doesn’t just make you feel good, it also helps broaden your perspective on life, something the team hopes young people will realise after attending SoundsGood.

Kan shared how helping the Pertiwi Soup Kitchen changed his view on the less fortunate. “There was a homeless man screaming for his cardboard when it was taken away because he used it for shelter. It touched me and made me think about the privileges I have,” he said. Hanan added: “Volunteering helped me see how fortunate I am to be blessed with such a wonderful life.”

And even though volunteering is about making a difference in someone else’s life, the volunteers themselves often take away just as much from the experience. “The feeling you get from volunteering can never be completely expressed in words. It only takes one experience to get you hooked on it,” Nazrin said.

Another SoundsGood team member Ahmad Syifaq Hassan, 22, added that volunteering gives you an opportunity to learn more about yourself. “The way you react to the less fortunate shows your true nature, and how empathetic you are,” he said.

Clearly, promoting volunteerism is in itself a good cause. But as Kan suggests, the best way to go about it in Malaysia now is to target the nation’s youth.

He said: “Young people are energetic and full of potential. To me, they should find what they are passionate about and translate that into something that can positively impact society.”

For more info on the SoundsGood concert, click here.

IMAM Response & Relief Team (Imaret)
Founded under the umbrella of Islamic Medical Association of Malaysia (IMAM) in order to mobilize relief teams during natural disasters especially locally, Imaret now has well over 500 volunteers consisting of young medical professionals and non medical individuals. They will be working with the SoundsGood concert to gather more volunteers to help build permanent flood-resistant homes in Kelantan this March as part of their post-flood relief projects.

The Nasi Lemak Project (TNLP)
TNLP is a young independent movement that aims to tackle poverty in Malaysia. They take pride in feeding up to 300 homeless people three times a week, and they don’t just feed them nasi lemak. They also provide tuition for urban poor students, indigenous people and refugees. They also do house repairs and provide medical services for poor families.

Change Your World (CYW)
Founded in 2009, Change Your World is a social enterprise that aims to create awareness among young people on social justice issues by using “creative tools” such as music and art. They have created programs to get young people involved in helping refugees and victims of human trafficking.

Small Changes
Small Changes was formed in 2011 by a group of young adults based on a simple motto: “Small changes, big differences”.
Their first program, a motivational camp, was launched to reach out to underprivileged students. Ever since, they have worked to reduce the educational gap between urban and rural students through various projects and have not looked back ever since. They now have various annual events that reaches out to all those in need of help. For unity sake, no one is marginalized. They plan to continually grow and attract more volunteers that shares the same passion and vision for a better tomorrow.

This article was originally published in The Star's R.Age 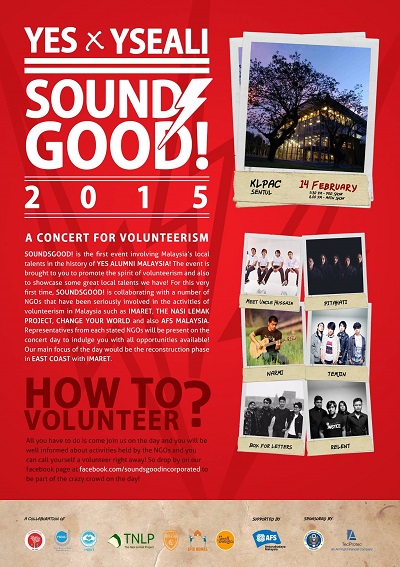 
Yasmina from Jordan shares highlights from her Floridan vacation.


Anika has readily embraced the role of cultural ambassador and is passionate in sharing cultures.


The YES alumni in Bahrain held a Christmas party.