Pomozi i doniraj -- Help us and donate

After 10 exciting months in the U.S., the YES Bosnia and Herzegovina 2012-2013 group finally arrived home. It was a wonderful feeling to hug our loved ones and to just be back in our home country after almost a year in the U.S. After our arrival, the exciting “being back home” phase begun. Family time, hanging out with friends, and getting back to our daily routine was the summer schedule for all of us.

But not everything was that positive. With our new perspectives, we see problems now that were unnoticeable to us before. As alumni, we felt that it was our duty to help our local community with the skills we got in the U.S.

Marta Knežević, Nadina Kapidžić, and I decided to go visit the orphanage in our city, Tuzla, to see if they need any help. When we got there, they told us that volunteering at the orphanage is very complicated because of regional canton laws. Even though the building looked OK, they told us that the government is not financing them at all and that they live off of donations. Most of the donors are just civilians that bring some food or clothes for the orphans, but that is not enough for the 60 children and teenagers who live there.

Having all of these things in our mind, Marta, Nadina, and I decided to do our first alumni project, one which would help the orphanage. We came up with the idea to organize a donation drive, and we presented it to our alumni group, the alumni coordinator in Bosnia and Herzegovina, and to some of the American Councils staff members in Sarajevo at our re-entry seminar. Everybody liked our idea, so we started developing our project. The name for the project was “Pomozi i doniraj”, which means, “Help Us and Donate.” We implemented the project at Gimnazija Ismet Mujezinović, one of the high schools in Tuzla.

In Bosnia and Herzegovina, we have fixed classrooms, several per grade, and in every classroom there are about 25 students. In Gimnazija Ismet Mujezinović, there are about 700 students between 25 classes. We went to every one of those classes and presented our project. We invited every student to donate what they can. For donations, we had spoken to the orphanage, and they needed hygienic products, canned food, clothes, school books, and toys the most. And, as an appreciation gift to the class that donated the most, we proposed to organize a pizza party.

After three days of donations, the students of the school had brought enough donations to fill an entire classroom. Together with two students from the Student Council of Gimnazija Ismet Mujezinović, Marta, Nadina, and I determined which class was the one that brought the most donations: it was class 2D. They donated three big boxes full of hygienic products and food.

In the end, it took us three separate cars to transport all of the donations to the orphanage. The staff members were surprised by the amount of donations that we collected, and they were thankful for every little bag. Now, at the end of September, we are celebrating the success of the project with class 2D and an awesome pizza party!

All in all, our first alumni project went great, and hopefully this was only the beginning of our alumni activities. 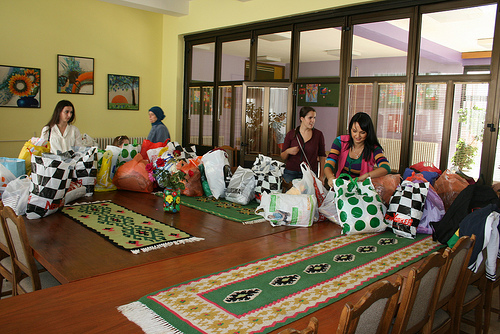 
Register for the YES Media Literacy Webinar on December 8 at 10am ET.


YES alumna Hajar from Morocco leads an alumni webinar on studying in the medical field.


Over 375 YES alumni learn how to implement accessible projects