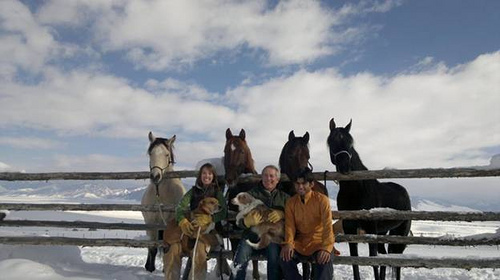 Muhammad Khan Nizamani, the February YES Student of the Month, is a young man with a mission: he is determined to improve agricultural yields in his native Pakistan and in his host state of Montana. Muhammad, who hails from a wheat and cotton farm in Sindh Province, won First Place and Grand Prize in Ennis High School’s science fair for his project on irrigation methods for field crops. On March 16, he will advance to the regional science fair in Butte. Montana has proven to be an ideal location for Muhammad. He quickly bonded with his host parents, David Kelley and Kelly Robinson, who themselves have a family farm. With his host family, he has not only helped with growing wheat but has also had the new experiences of riding horses and having pets. Muhammad’s host parents support his wish to learn all he can here and take it back to his home country. They take great pride and joy in helping Muhammad and encouraging him to succeed.

Muhammad has excelled in his studies, making the honor roll at school each quarter while taking a challenging course load. He played on his school basketball team – a new sport for him – and taught his American classmates to play cricket. Muhammad took second place at a regional speech tournament in Original Oratory, delivering a speech entitled “The Future of Pakistan,” in which he spoke about water resources, education and the importance of improving U.S.-Pakistan relations. He advanced to the semi-finals of the State Championship Speech, Drama and Debate Tournament. About his speech, his host mother commented, “I think it really speaks to the mission of the Kennedy-Lugar YES Program.” Muhammad has also been selected as one of 25 ECA-sponsored exchange students to participate in the Global New Media Youth Tech Camp in April.

Thankful for all the First Times


Yusr from Bahrain shares her favorite first experiences in the United States.

Impact through English in Senegal


Mouhamedoune from Senegal turned pandemic boredom into an English academy