A Homecoming Princess is Crowned 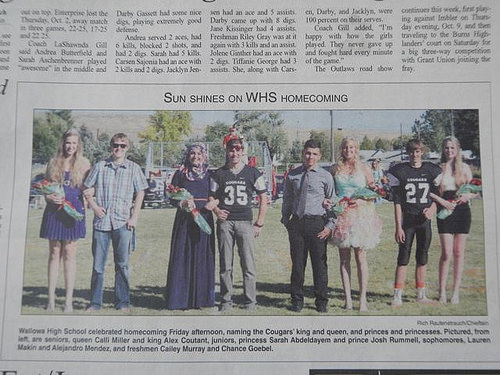 YES student Sarah Abdeldayam in the center/left with her homecoming prince at Wallowa High School.

One week before the the homecoming festivities at my high school in Wallowa, Oregon, began, each class gathered to decide who would be the princess for their class and who would be her prince. There was a meeting, and then we had to vote. The junior class voted for me to be the princess with 8 votes out of 14, and my prince was a student named Josh Rummell.

I will never forget this day. This was my first homecoming crown - a crown I received from such lovely and friendly people. Wallowa High School is a very small school with a big heart. Thank you for this amazing experience, and thank you for making me the happiest girl in the world.

I'd like to give a special thank you to the YES program, as well. I wouldn't be here today writing this story without the support of the program. My heart is filled with happiness!

Returning Back to My Host Community


YES Alumna Tilyan from Pakistan shares what it was like to reunite with her host community after two years.

A Passion for Presenting

The Journey: A Host Family Reunion