YES Abroad participants in Bosnia and Herzegovina are currently on their winter break until the end of January after their busy and successful first semester as IB students at 2. gimnazija (the name of their host high school). On January 9th, the staff of American Councils in Sarajevo office decided to treat the hard-working YES Abroad students to a session of bowling at the Bowling Center Radon Plaza in Sarajevo. Students' host siblings were also invited to attend as were YES alumni currently living in Bosnia's capital city. 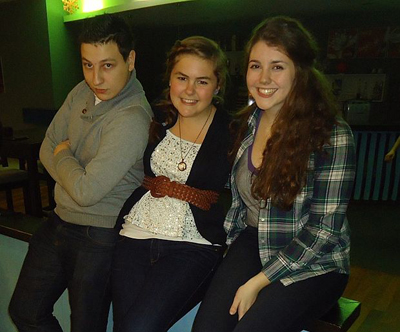 [Host brother Irfan at left, with host sister Katie and teammate Emma were part of the winning team.]

Bowling, an excellent recreation and for some a serious sport, can also be used as a great team building activity. At the bowling night, our group was split into two teams (Team 1 and Team 2) headed by American Councils staff members. YES Abroad students were placed in teams with their host siblings in order for them to learn to work together during this fun activity and to build interpersonal relationships. Helena Ratte for example, was placed in Team 1 with her host sister Sanda, as was Savannah Wooten and her host sister Ena and in Team 2 Katie Wells was placed with her host brother Irfan. After the first ten-frame game was completed filled with a number of strikes and spares, Team 2 emerged as the winner with Katie Wells and Nejra Rizvanovic (YES alumna) as the top two scorers. Go team!

[In this photo, YES Alumni and YES Abroad participants show their team spirit.]

A Month of “Why Nots”


Fatma from Libya shares about her first month on the YES program.


Manahil from Pakistan experiences a taste of American culture at the Washington State Fair.


YES alumni from West Africa participated in a hybrid workshop on project management.